As always Zizek gets to the heart of the matter.

Click Here to watch Zizek YouTube about Homeless, Charity, Realtors, and Private Property. To be homeless, in the Eastwest Realtors of the game played by the Rich is not the solution to homelessness. Nor is the CHARITY that degrades and demoralizes the homeless.  Zizek adds “It is immoral to use private property in order to alleviate the horrible evils that rest from the institution of private property.”

I will take the problematic an ontological direction. In this ontological inquiry, my focus is on the human-Nature interconnection of your own authentic Self, discovering a very inauthentic-self you and I, are projecting. This is either a societal Grand Narrative of the homeless (& and homeless veterans, and veterans too) as a ‘they’ a thematic category, that aspires to be a universal, and also the ‘living story’ that becomes your own living Experience projected onto the Other, making them once again a ‘they’, an objectification, a reification, that has lost its grounding in spacetimemattering, ontological-existential Being-in-the-world. Why? Because projecting your ownmost living story (or a societal narrative) onto the Other (i.e. homeless and/or veteran) is a way of not listening to the Other’s living story.

Care, the Being of the antenarrative of fore-care that is constitutive of storytelling entities, and the whole of storytelling not lost to emptiness in an everyday inauthentic, has to inquiry into the “so manifold” worldhood of the homeless (veteran) (Heidegger, 1962: #181).

Here we inquire into the existentiality and facticity of the antenarrative of fore-care, a kind of Becoming, one of many kinds of antenarrative possibilities of storytelling.  The Self, for the most part is inauthentic the “they-self” — “average everydayness” manner of Being-in-the-world limits its “ownmost potentiality-for-Being” (IBID.).

The living story web, on the other hand, can be the inauthentic Self, when its Being-in-the-world is projected on to the Other’s living story, which I am told in Zen Buddhism, is the dark side of the soul.  The shadow side, of the Self, limits our existential possibilities so an “environmental experiencing” both ontically and ontologically is impossible (Heidegger, 1962: #182).  This suggests, to me, that veterans returning from combat, and homeless returning from the violence of the streets, have seen the dark side of the soul, the shadow-side, and have many soul wounds.

From “its own standpoint” one’s own living story, can prevent ontico-ontological access to the Other, by not Being-in-spacetimemattering, cutting off its own potentiality-for-Being-in-the-world, Nature in the posthuman sense, one experiences “anxiety” (IBID.) For more, see Posthumanist Ontology Study Guide.

We ar einquiring into the falling from thw whole of storytelling, all its involvements context, into what is left in the they-self” “will, wish, addiction, and urge” so that “care cannot be derived from these, since they themselves are founded upon it” (Heidegger, 1962: #182-183).

What I am calling ‘fore-care’ its Becoming, lies far from our “ontical acquaintance”  (IBID.) and the inauthentic self storytelling access, projecting they-self or living story myopically onto the Others own living story worldhood.

For example, the ontical approach to Spice-business, the sale of faux marijuana to Spice-heads, cannot access care by empirical measurement, or by claiming a worldless universal standpoint, “to say nothing of the act of violence one might discern in our setting aside the confirmed traditional definition of ‘man'” who in the posthumanist standpoint is inseparable from Nature (Heidegger, 1962: #183).

Our (auto) ethnography must be beyond “an existentially a priori anthropology” of some sociolinguistic structural content analysis cut off from our own connectedness to the Subject, as if we are being unbiased, which is impossible, since no method removes our answerability to our posthumanist entanglement. Even dear David Spradley’s Participant Observation and Ethnographic Interviewing, 12-step programs are little more than ontic, treating the subject as what Lou Pondy and I (1980) called, ‘in-place metering devices.’

Our focus here is the “ontological interconnections of care, worldhood, readiness-to-hand”, and not falling into universal epistemological quests for idealism, nor the ontic illusion that our subjectivity is seperate from some objectivity method (Heidegger, 1962: #183).

Last year I wrote a book on four pragmatisms of storytelling: COPE – Critical, Ontological, Ontico (post-positivist), and Epistemological (Boje, 2014, Storytelling Organizational Practices: Managing in the Quantum Age). Below is a summary chart of the COPE pragmatisms of storytelling, and where I place, Richard Rorty, David Boje, Martin Heidegger, William James, and Karen Barad (working in the -in-betweens). Heidegger, for example, repeatedly stresses the ontico-ontologico between, while Barad is committed to working out the episemico-ontologico between. William James (1908) worked out a between epistemic (idealism) and ontico (realism) refusing to dismiss either from the playing field of social science. I, on the other hand, am a socioeconomic activist, an researcher intervenor who sets out to use Critical Theory and Critical Ethnography to change my relation to Being-in-the-world. 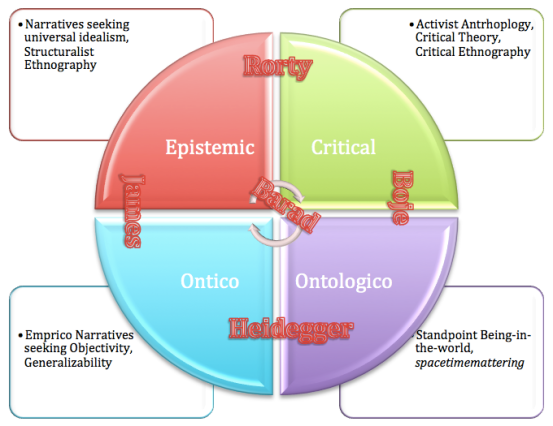 The Becoming of fore-care, its authentic disclosedness, discoveredness, interpretation, understanding, assertion, and even its anxiety is a way of attunement-antenarrative of Being-in-the-world, in-storytelling.  It is the working out of the struggle of the inauthentic-self with the authentic-Self, discovering the difference, and “an authentic potentiality-for-Being-its-Self” (Heidegger, 1962: #184).The Rorty calls the mirror-self on the mirror stage.

For more on the Mirror-Self, the Posthumanist Horse (Nahdion, our own horse) looking at Self in the Mirror, and there interplay of Social-Self, Frozen-Self (after trauma) and the Heart-Self, please see http://peaceaware.com.